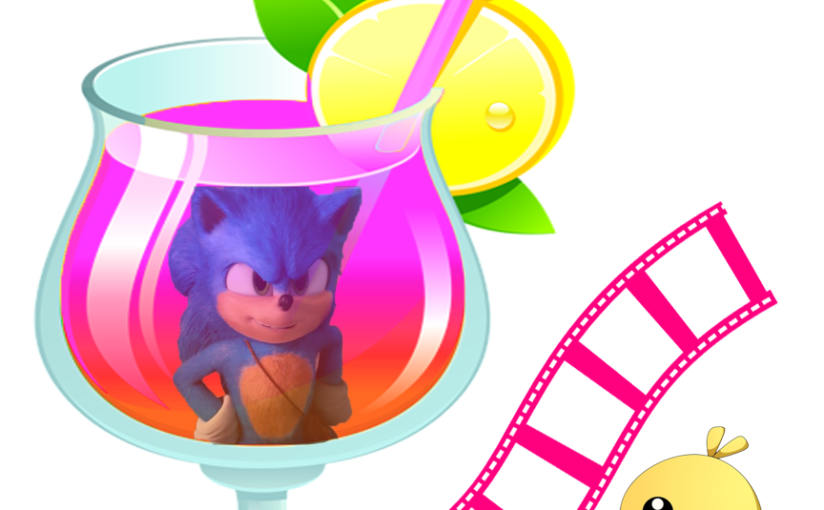 I have always preferred the red plumber over the blue hedgehog. Sonic has never been my defacto platformer hero. Sonic Adventure 2 changed that because I had my Chao Garden. After that it would take me until Sonic Mania to fall in love with a Sonic game again. When the movie was announced I and many people to expect a disaster of the likes of Sonic 06. Yet what we actually got was one of my favorite Sonic products ever.

Rolling around at the speed of sound

As a kid sonic always confused me, the multiple path to the finish were something I did not particularly enjoy.  No matter what route I took it all felt kinda samesy and the jumping felt stiffer than Mario to me. The two player mode in the second part felt odd to me and it took me until the third installment to thoroughly enjoy the blue bluer. I liked the first two just fine but I played better. As a result  I mostly grew up with the old cartoons. Yet I can happily say that no matter what incarnation of sonic you grew up with, if you have had any encounter with OG sonic you can get behind the hero in this movie. So maybe for those who grew up with that scarf wearing monster from Sonic Boom this might feel a bit odd but if you play some Sonic Generations this Sonic will suit you just fine.

The movie opens with a young sonic back in his homeworld. Through some forces of evil in his homeworld Sonic is forced to flee. Since he has a lot of power evil will always be drawn to him. It’s made clear to us that Sonic has been bouncing around many worlds and Earth is the first planet he really seems to have taken a liking too. However Sonic is also very lonely using his speed to be undetected.  In a moment of loneliness, sonic runs away his sorrows.. causing an EMP pulse of immense power. The Army sends the weird Doctor Robotnik played by Jim Carrey to investigate and within the first 15 minutes the movie sets up their entire plot, shows us the motivations of all the major characters It makes clear that this movie like sonic will move fast. Like it should be. The story is very basic like a sonic story should and it doesn’t linger or pad out screen time with exposition. We are here to watch sonic go fast and maybe see Jim Carrey be Jim Carrey.. and that is exactly what we get.

Sonic is a delightfully light hearted movie aimed at the young but with enough visual jokes to entertain those who grew up with Sonic as well. It takes them back to their childhood trough visual jokes, nostalgia and old school cartoon humor. We don’t really get inside jokes that us adults will get but the kids won’t. No innuendo jokes, no weird looks between actors that we as adults can respond to with. “Oh he ain’t gonna get anything tonight!”  Sonic’s comedy is all about going over the top. Sonic is a kid..which is in line with how he was in the 90’s cartoon and the earlier games. Humor comes usually from movement. Fast movement or the fact that Sonic is so Hyper he rarely ever shuts up.

The 3D Sonic.. the one we have known since Sonic Adventure , is a minimalist he acts all cool through minimalism. A rocket is launched at him and he will just take a quick sidestep in the split second before he is hit. Movie Sonic is much more a kid, when a missile is fired on him he plays with it, rides it for a bit, uses it as a drumstick or runs to the other side of the world just to find a silly item to use in a convoluted plan to stop all attackers , kinda thing. It’s a bit like how Dante from Devil May Cry would yawn when a train is derailing moving to him as a projectile. He kicks his chair against a brake while taking his jacket off the chair and putting it on. DMC Dante.. you know the black haired kid would flip his sword 27 times in the air, would do an acrobatic jump create explosions and other and somehow the train is stopped. Movie Sonic is like the later.. stuff is done in access and whether that is sonic or not sonic to you is what will make or break this movie for you. Sonic has  zero edge in this movie. This IS Sonic but it will not be everyone’s Sonic.

Clearly they Played the Games

Sonic is a nineties movie trough and trough. It uses tropes from that era, it uses storytelling of that period it even uses actors from that period. Jim Carrey plays Jim Carrey in this movie and he is great… Wait.. he plays Ivo Robotnik?  Nah! Jim Carrey plays Golden Age Jim Carrey and he is just called Ivo Robotnik. We get Jim Carrey from his classic days. He shines in this role like he did in Ace Ventura, The Mask or Dumb and Dumber.. mostly because it’s that exact same type of character again…but evil. Which in my opinion works even better. Like the Mask for example it gives Robotnik a sense of loonesy it makes him more unpredictable and dangerous. In his own way a villain as weird as this can be menacing.. in a child friendly and funny way. For example if we go back to the Edgehog universe, Eggman is made out to be some kind of dark brooding evil genius.. which makes no sense on account of how easily he needs to be defeated. Jim Carrey’s variation is an incredible nutjob. While potentially very dangerous his weirdness makes him flawed and credible to be easily defeated. It really worked for me in this movie.

This feeling of understanding is met throughout the entire movie. They know what game elements do work and do not work. Robotnik in a Ufo with a giant Wrecking Ball would probably not work. So they made him a master of drones. Which is up to date and makes the “boss fights” still against him.. but more credible. Sanic is there! The meme drawing that is rather beloved and took on a life of it’s own! Yes they put Sanic in this. A boss fight against robotnik where Sonic has to hit the cockpit of his flying device? It’s in there. Logically you can’t have Sonic lose all his rings when he gets hit… but believe me it’s in there. Of course it’s not as in the series that as soon as he gets hit his rings scatter anywhere, no they are an important plot device this time and each time Sonic happens to get hit he has a good reason to hold them at that time. It’s  great that little things like this are woven into the plot. I really loved the creative ways they managed to do this. Of course they will not be able to keep this up in sequels if there will be any, but darn they sure went all out in making this feel Sonic. These people love the orginal games…they do almost completely ignore the 3d era though, they must not like them. The opening flashforward would have been the perfect place to play City Escape.

After having seen the movie I do get why they made the first trailer with the Gangsta’s Paradise  music. This like I said earlier is not a product of the current times. It celebrates the age of Sonic’s glory days in its fullest. From it’s road trip comedy roots to 90’s superhero is final act. This movie hits that nostalgia beat for beat. Doug Walker the Nostalgia Critic reviewed this and told the movie came out 30 years to late.. and I think that he misses the point.  No it’s not 30 years to late. It takes you back 30 years to the mindset where Sonic was the hottest thing. Where Sonic was cool. Nowadays Sonic’s name isn’t exactly stain free. All those years ago he was new and hip and there was no Sonic 06 and no Sonic Boom, and no .. Werehog.. and .. well I can go on for a fair bit more but you all get my point. Genesis Sonic was the best sonic or at least the untainted one.

Yes the story of this movie is extremely basic.. to a point that it is barely existent. “Sonic gets detected and has to go to another world.. but he lost his rings because he got hit and now he has to find them before the evil guy can get to him”  That is it.. and yes it’s predictable, we all know Sonic will face off against Robotnik.. whom he calls eggman because because guy uses numerous egg shaped drones all the time. Yes the human characters are super predictable as well.. blablabla critique , critique ,critique. Yet again.. that’s kind of the point. The Sonic 2d games never had a deep story.  Yes Edgehog Era sonic games do have intricate plots about ultimate life forms, falling in love with a princess and being cursed to turn into a sonic with an incredibly annoying companion but what this is based on was simple. Get from point A to B and beat a boss. This movie nails those beats so is it a valid point of critique? I did not like that Sonic does a Fortnite dance when he is happy.. because I HATE Fortnite , but I will not expand that on my blog. Does that mean I should say this movie is bad because he doesn’t do his traditional finger waggle thing instead?  This movie is intended for younger kids so obviously there will be childish jokes and I am sure some gamer kids will like that reference.

Sonic by no means is a perfect  movie but clearly it is not trying to be either. It won’t win any oscars and the human characters, except for Robotnik are a bit throw away but that again is partially intended. We do not go see a sonic movie for the story of officer Tom. We want to see Sonic fight Robotnik, that’s what we get. If you you want to see a modern superhero movie this flick may be something you pass on. In fact I could come up numerous reasons why this movie is not for you. That’s not how this movie is made. This film not made to to be larger than life. It’s not made for people who think the first h in hedgehog is silent. Will you like this movie can be answered in three simple questions.

1.
Did you ever play and at least liked a 2d sonic game? (Spinball and the slow one don’t count)

2.
Do you like Jim Carrey in his classical roles like Ace Ventura, Dumb and Dumber and the Mask?

3.
Do you still enjoy 90’s movies along with their cliché’s and despite their flaws?

If you at least said yes to one of these questions Sonic will be  a fine movie to visit. If you selected at least two I am sure this movie will be something that you will thoroughly enjoy from beginning to end. This might not be the best movie ever.. but I am pretty sure it is the best Olive Garden commercial ever. If you answered yes to all my three answers with yes.. the conclusion is very easy. You GOTTA go so see it… and you Gotta go fast.