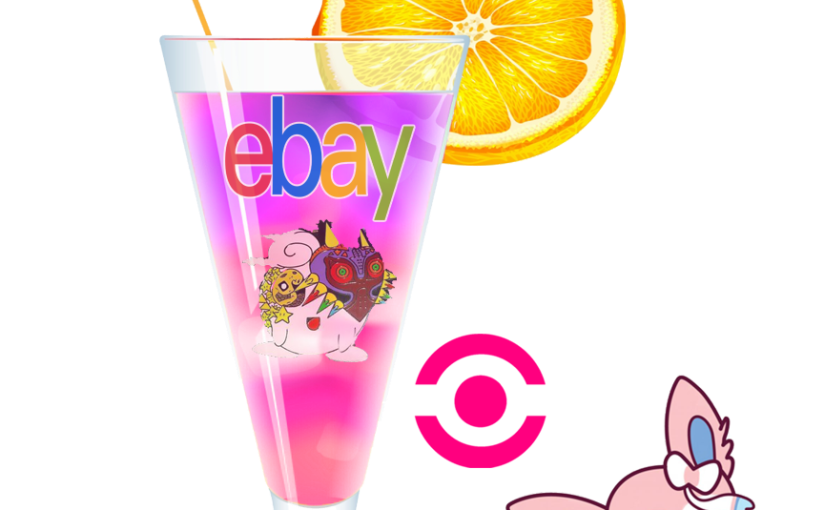 It’s time to search for more Pokémon. Since Jason Paige told us to search for them far and wide I have decided to go to the nooks and crannies where you do not normally find pokémon. Now eBay is not a weird place to search for Pokémon as there are plenty to be found. But today we will look in categories where you do not expect them.  Like Antiques, Specialty Services and eBay Motors. We will look at odd items that will make you wonder, why do they exist.. how did they get tagged here or what does this have to do with pokemon?! The search rules, I can only use the tag pokémon in the search bar and can only select from the first 10 pages of hits.  In each I’ll find something I would buy.. something I would not buy and something I wonder if anyone buys!

Pokémon is not something I would connect to health items… sure I bet there is some makeup .. which happens to be tied in to the item I really DO want. Yet there was a surprising number of health items as well. Items like Pikachu Bandages or heatable of coolable rice packs. So you can create your own pokémon heat or cold pack. A shout-out goes to the Pokemon Bath bombs, who thought it through that children would not like to see Pikachu dissolve in their tub but instead they made bath bombs that release little pokemon. Would buy if I had a bath.

Item that I do want: Eveelutions Eye Brush Set

I am a bit messy with makeup, my eye brushes keep getting lost, and when I do my big make up I usually lose something. I have very poor vision -5, and 4,75 so I am blind as a Zubat when I am in front of my make up mirror.  With the flesh shaped blob that I assume is my hand blocking my view applying makeup properly can be a struggle at times. I would wear contacts but they made my eyes deteriorate even further so now I have pink glasses.
Anyway with the Eeveelutions make up kid not only I would get a set of brushes I want to treat with actual care.  I would also gain a much more lengthy brush which would actually help me with my nearsighted application blobby shape troubles! I would also buy the “thunder shock*  eyes, eye shadow set. The Brushes are about 25 dollars and the eyeshadow about 9, it has some nice zippy colours I could actually use like lilacs and such.

Item that I do NOT want: Pikachu Electric Toothbrush

Now I do like the idea of an electric Pokémon being used for an electric toothbrush but  just look at this thing it is super unpractical. Not only do you get a brush that you can’t find anywhere else, the way you attach it also seems rather unpractical.  The toothbrush looks extremely flimsy as well but is acompanied by a massive chockachu. How do you even hold this thing I wonder. It’s cheeks will light up which is cute…but how will you see it if you are brushing your teeth? They clearly did not think this thing trough.

Does your kid have a lazy eye AND does he wear glasses? Did the doctor not put a patch on the eye or you want to cover it up with a mediocrely sewn Pokéball? Than this item can be yours for the amazing price of 9 british pounds. You can have your pokeball sewn up to sock for your kids glasses in both a red OR a black patch… in two sizes of choice. Yet I wonder how many lazy eyed bespectacled children would think.. let’s go and see if eBay has something that makes me look a lot  cooler! With a pokéball?! I really wonder.

So apparently pimping your ride out with some pokémon decalls is fairly popular.  From bonnet .. I think that is the word, stickers shaped like an evil gengar too a Ducati Motor Riding Bag with cute little pokemon on them.. and a lot of  ornamental number plates. This category had a lot more stuff in it than I thought. Unfortunately no Pikachu car.. so for my wishlisted item.. I had to be creative. I am not allowed to drive anyway so meh!

Item that I would buy: Pikachu Steering Wheel Cover

I have really sensitive palms, in the driving lessons I took I always found a steering wheel to be a rather uncomfy thing. Luckily on eBay I can get the softest looking steering wheel cover I have ever laid my eyes upon and it’s shaped like Pikachu as well. I did not know people wanted to have their steering wheels resemble a Pikachu.. but I totally can get behind the sentiment. In fact it’s that hard to get a complete Pikachu upholstery for fairly cheap.  Like for 200 bucks you can pretty much have the electric mouse, all over your interior. I think that would look kinda cute with the pink car I would hypothetically get.

Item that I would not buy: Sexy Misty Window Decal

I originally selected this item as the trash I think nobody would buy! Because this has very little to do with pokémon. We see a misty that looks like her outfit is being possed by Senketsu from Kill la kill. Creeping up her outfit to the max. She has a lusty gaze in her eyes and the word cock written all over her tank top. Why she would write that on I am not sure?! There is only one avion  pokémon in that criteria.. Blaziken (and kind of Combusken) and that was not a pokémon she ever used nor seemed to desire. So I do not get the shoutout. She must hold some serious airbags underneath that shirt as well because there would have been plenty of room to write Rooster as well, at least there would not be any misunderstandings. Why is it not on the nobody will ever buy this list then?  Because it was the only item that was being watched during my research by no less than 34 people even! Vagrants!

Item that I think Nobody Wants : Trucker gear stick with Pokeball Gear Knob

There were a lot of Gear Knobs shaped like Pokéballs for Honda Civics during my search.. which makes sense because from what little understanding I have that  stay at home tuner car. Like the Vin Diesel wannabe’s all get a Honda Civic. It’s one of those cars that is driven by people who put weird shaped body parts underneath them and  make it look cooler.. then they go to Mcdonalds and play music really loud from their subwoofer things. I haven’t really heard of pimping out one’s truck though. I mean I saw some pretty pimped out ones.. but that’s usually not really something akin to pokémon. I just don’t see many truckers liking the franchise. I might be stereotyping here.. but  I honestly dont see anyone taking out their entire gear shifty thing to put on in that has a pokeball nob.Surely if someone wants this.. there are easier ways.

So obviously the Pokéflute is a thing.. however that instrument is actual more like a toy..that based on conventions though.. can still produce a catchy tune. Most of the stuff found in this category is sheet music though.. and some kind of tuning device that features Bulbasaur… it’s nice to see that my boy gets some love. Yet it’s boy.. starters have a very low female encounter rate so we can assume! Of course there where a few interesting other items in this category as well

Item that I do want: Pikachu Electric Guitar

I do love when things come together. An Electric Pokemon.. and an Electric Guitar.. that is pretty neat. It’s like one of those videos where people cut styrofoam things in equal slices or how playdough is made into on big non breaking string.It works. Since the pokemon theme is excellent to play on an electric guitar it works even better. The design of this thing is pretty stunning as well. They even placed the Pika head and tail in positions so you could play it and still show of the pokémon without covering it with your hands and all. That’s neat. Still if I would have it I would not play it.. I would hang it on my wall. It would just liven up any room and does not deserve to be in a guitar case or something… also I can’t  actually play any instrument let alone electric guitar. For a wall ornament though $1250 dollars is a bit pricey.. given that that is almost three months worth of rent for me. If I ever win the lottery or become a famous cewebrity though….

Item that I would not buy: KORG MA-2, Pokémon Metronome

This is a case of solid idea, bad execution. It’s that styrofoam video again but this time they slice unevenly. Its that playthrough with two mixed colours smudging up destroying the clay. The “electric item” so Pikachu works thing .. for my feeling doesn’t apply. It feels like a rhythm computer is always electric anyway even if we also have analogue metronomes.. it feels like the difference between a car and a bike. Pikachu on a gameboy is meh.. Pikachu on a electric car is clever.  There is a difference..to me. For a metronome they simply picked the wrong pokémon.. obviously it should have been the one pokemon that made metronome a signature thing in the first series, clefairy..or that thing that stole the idea and made it his.. in the form of togepi. If you make a pokémon themed Metronome… use an actual metronome pokemon!

Item that nobody should want: THIS pokéball Ocarina

First of all, why would you even make a pokeball Ocarina.  We already have the pokéflute made into an actual playable instrument.  That is a canon game item made into a real item that sounds and looks iconic. Never did an Ocarina feature in the series nor does this thing actually look like an ocarina. It doesn’t even look that much like a pokéball either. It’s badly painted with some jaggedy lines. Which geek is geeky enough to think.. I would like the pokémon ocarina while for less money they can have the actually Iconic Ocarina in video game lore. A hardcore pokémon fan  would rather want the flute because that’s an actual thing and the hardcore geeky ocarina player would want the Ocarina of Time as it looks much more like an actual instrument.. plus people at cons wil recognise it. To me this feels the same like putting that “mug” your son made on display..without the emotional undertones. For almost 40 dollars there are better ways to spend your pokédollars.

Now with that out of the way we shall take a break from eBay for now. Yet there are still plenty of weird pokémon practices going about that I haven’t told you about yet. To find out more about the treasure trove that is eBay and Pokemon please follow the blog so you will not miss the next episode. If you wish me to do the same with your favorite anime show..let me know in the comments. With that I will be off, I love you all, keep on smiling!