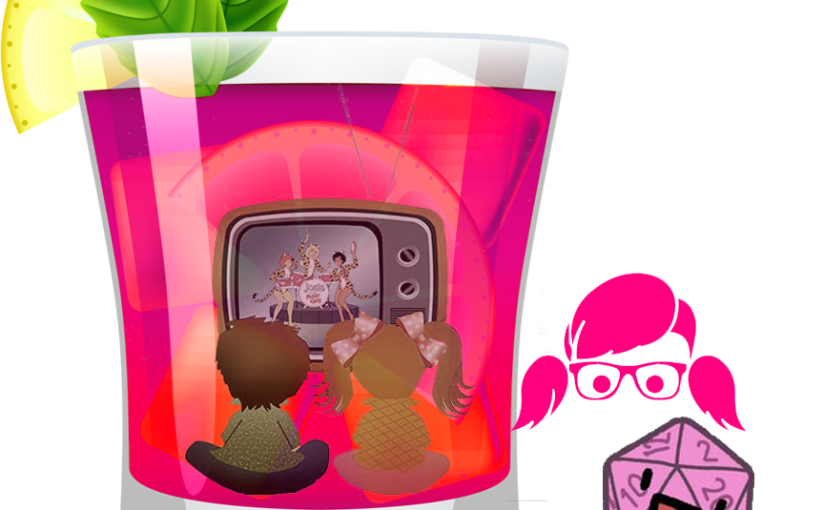 We live in the era of great convenience nowadays. With all the streaming services we can watch whatever we want when we want it. Yet when Pinkie was a kid, she would have to get up at 6am to watch the first episode of her favorite cartoon. We had to take bathroom breaks and snack runs during commercials, and we had to watch through a lot of stupid series for the next good one to show up. It was amazing!

Yes I know I have grey hair! I dye it that way as cool colours really complement my pastell wardrobe a lot okay?! Today’s post is not about how things used to be better but about an emotional component that we have kind of traded in for the sake of convenience. There is something to be said about both. I love being able to see what I want and being able to pick from so many things. Yet I also notice how this has changed our mindset. Back then we used to love just about all cartoons, even the ones we disliked became tolerable after three or four weeks, by the end of that anime arc we were following that series that fell in between Yugioh and Dragon Ball was part of our beloved ritual.

Today I wonder if having access to everything doesn’t kill off a part of our viewing experience. Is it the reason that we have become so hyper critical trying to highlight the bad? I am not such a boomer that I think the old shows were better, because they were not. If we see how far writing and animation has come since the 80’s , we get a much greater consistent output. Back then there were 5 anime that were super great and 20 that sucked, with cartoons it was even worse!

For every Scooby Doo, we had 10 shows about 90’s kids spouting already outdated taglines, trying to save nature with their instruments and rad attitude. Yet back then… those shows were “okay I guess?” Now when we see another Isekai show being made we Hiss and tell it’s the worst thing ever .. for picking a genre. Something changed and I think it might have to do with what South Park described as the “Death Of the Living Room”

Finish your homework, choke on your cereal

When I ran home from playing with my friends to catch Dragon Ball in the late afternoon and I scraped my knee getting there.. I didn’t care so much the episode wasn’t that good, my knee throbbed in excitement for this show. .and it was worth it!  Even if nothing happend we would find a reason to validate why it was worth it! OMG! Goku and Gohan just did normal things but in super saiyan for.. to save on energy from transforming so cool! They just beat up some normal humans!… Sugoi!

Part of this is of course not looking through stuff as a kid anymore, but even  when I already was grown up, in my early twenties on saturdays we’d watch Crime Scene Investigation with the family. I’d had to give up whatever game I was playing at the time, save my pokémon game and put it away to watch with my family. Not waiting till I finished a boss fight.. it was on NOW and we could not start it later. It was back in the time before tv channels began to endless loop their content so if you missed it you could catch it again six hours later. If you missed that episode, you had to illegally download it to catch up or miss it , until rerun season.

It’s this inconvenience that truly forged you into loving a show.. you had to plan your schedule around the show instead of planning when you’ll watch the show around your schedule. It sucked… but it must have meant we really loved these shows. I have great memories of rushing my breakfast because Biker Mice from Mars was about to air.. and it was a to continued episode, I ended up nearly choking on my sandwich and still I was trying to crawl to the living room to put on the episode so I would not miss a thing.

Our time has become more expensive, more valuable in recent years. Ten years ago my time was worth less than the newest episode of CSI, or the first Season of Australia Master Chef.  Now my time is more important than these shows I still watch them, but I watch them at my leisure, not when they air on tv… there is a different source to watch them anyway! Websites where I can rewatch them as aired on tv, but also websites that also stream these. If I want to finish that game first I easily can,  if I want to get some groceries and leisurely eat my dinner before watching them, I can.

All the effort of watching a show is gone. I don’t even have to pay attention to a show, if I miss something crucial I could just watch it again, so if Mom calls during the show I can easily answer. Back when Pinkie still had a Nokia 3310, her phone would be turned off during tv night so I could not be disturbed, because if I missed a clue in CSI, the episode was ruined.

All we have to do now is somewhere somehow have 20 minutes and we can watch an anime. On any device we want… it’s there for us when we are to sick to do anything else.. it’s there instead of the magazine whilst making stool, it’s there the moment we get bored of backtracking again in the video game we played.  Anime and cartoons have become our best friends, always there for us, but it’s kinda easy to be mean to someone who is always there for you regardless if you are shitty to them.

Plenty of you guys will probably know this, how people walk over you because you are always the good guy that will support others regardless how mean they are to you. Back in the 80’s and 90’s we were trying to get Senpai (the show) to notice us ( the viewer)  now we are the Senpai and the show is pleading for our attention and we can be pretty Tsundere, because we also got so many other worshippers.

If Fruits Basket is no longer worth our time we can easily fill it with something else. It’s only logical that we only pick the shows that resonate the strongest with us. Yet with this attitude we have all become somewhat Chinese Tiger Mothers  to anime, cartoons and tv shows…games as well. If Midoriya isn’t amazing enough we disown him and focus on Touru.
Midoriya still can be an 8 out of 10 guy, but we have the possibility to only surround ourselves with 10/10 stuff.

Now this is an exaggeration of course but I still think that since the living room died, the tiger mamma attitude is there. We had to make some effort to spend time with little Goku and even though that play he did about Garlic something .. was passable at best.. we loved our time spend together.. now if Little Carole misses  one beat.. we take out the Twitter Ruler and bash at little Carole! Our time has become more expensive and she just wasted a few seconds of it.

Our perspective have changed, saturday morning Pinke could strangle Angela Anaconda and got fed up seeing Bobby’s World with Howie Mandel  but Shin-Chan would show up after that, or Medabots. Which also weren’t the best in the lot..but it was what we got and we are proud of them. Back then , during the Saturday Morning Cartoon Arc, we were looking for love. A show that stuck with us despite its flaws. We saw the flaws but we did not care , like meeting a girl on the street by bumping into her. She has a plain looking face and poor taste in shoes, those big boots nearly broke your pinky toe, but she has the sweetest smile.

To see her again, you have to do your groceries at the exact same time you did last time when you bumped into her.. and there she is walking on the other side of the street. She isn’t always smiling but when she does you just melt a little inside. Eventually you see her so much something deeper grows, something you had to bleed for and inconvenience yourself for. There was something magic about watching shows on Saturday morning, about setting your alarm clock about nearly dying on a spoon of rice krispies.. to see her smile.

Now that we have entered the “Content on Demand Arc” we aren’t looking for love anymore, we are looking for art. Imagine that plain faced girl again..but instead she is on a picture, with a thousand other girls, maybe even on Tinder for a more elegant metaphor. Now she isn’t always smiling on her pictures there is one.. but on she just poses at an exotic location and on the other she is doing a weird pose and there is this jarring catchphrase slogan like “believe”  on her profile as well.

There are ample more beautiful girls on the picture or on Tinder and you share what you swiped with your friends would you really spend a right swipe on that same average looking girl with just the super cute smile?  Many of you will say yes…but be honest. Anime will always swipe right… even the prettiest once that are out of your range and they will talk back to you when you talk.. would you still swipe on the average girl?

Bringing back THE INCONVENIENCE

I think I am going to bring back my saturday morning cartoons! Just open My Anime List and pick five or six series based on their cover art alone picking something that resonates with me . Assigning them to a certain time like BNA at 9:00 , Yu Gi-Oh Sevens at 9:30 , Bofuri at 10:00.  With commercial breaks at the 15 minute mark. If I am few minutes late I have to skip those minutes, if I miss the time slot, next week I have to watch the next episode skipping the one I would have seen. If I don’t like a show and want to drop it I will have to wait until it reaches mid season to drop it having an open time slot in between.

No pausing allowed only during the commercial break. Better make sure I have my breakfast ready! Better make sure everything is set up in time! Or else I will miss parts of the episode! This way I’ll have to commit a bit to anime.. I will have to go out of my way for it! Giving it the value it deserves again. Anime is greater than just my free time! It deserves my attention  and dedication!  “Oooh” I can add season two of DuckTales into the mix.. I still need to watch (most) that! You see I am in love with this idea!  Let’s make our shows something we need to work for again! Let’s show our love! Pinkie’s Saturday Morning.. is starting! It will be inconvenient as heck!…It will be glorious. I’l be ready!