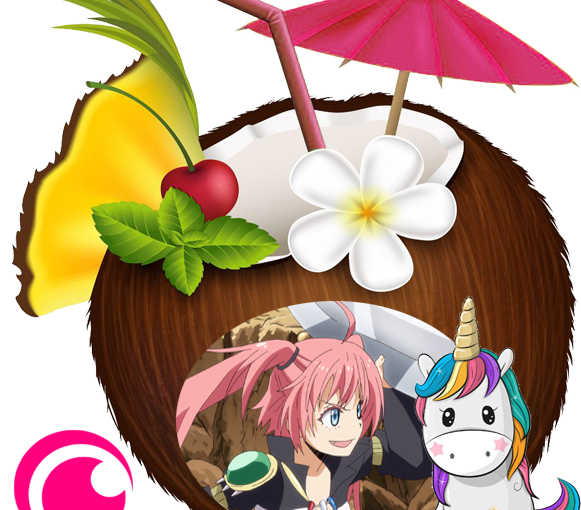 Very few Isekai shows feel as wholesome and whimsical as  Slime to me! The episode we feature in today’s Animini to me shows exactly that “feel good” vibe I love this show so much for.. yet it also shows some of the shows weakest points for me! A great episode to be the first to break off from my bulk Sunday review!

This episode picks up right after establishing the great Jura Alliance. Gazel Dwargo gifts Rimuru the scientist “Vesta”  whom we have seen earlier in .. I think it was episode 4! But I am too lazy to double check! The asshat guy .. now redeemed becomes a scientist for the village. We also see the Lizard Folk join Rimuru City and finally Gabiru’s sister is named as well.. which transforms her into a very humanoid person with a little dragon fang and some wings. Gabiru evolves further and gets some wings while he is being made a herb farmer down in some caves. Vesta is made the village scientist charged with making potions from those herbs.. like we saw Rimuru do in the very first episode of the show. The village proserpours but it also seems to have gathered some unwanted attention from the demon lords. A pink haired girl in particular takes interest in Rimuru , the Great Jura Alliance and the absence of the great Dragon Veldora and rushes over.

We quickly find out that she is the first person that is stronger than Rimuru. Even while holding back she has 10x the magicules he has. When the ogres attack the Demon Lord known as Milim she quickly beats them without much effort prompting Rimuru to join the fight. Knowing he does not have a chance he decides to feed her honey instead to appease her. Bribing her to give her some more.. as he discovered she has a very childish nature.  He also notices she is flat.. probably because she is so kid like!  Milim likes the honey and the two start talking and Milim asks Rimuru to become a Demon Lord, which he tells he has no interest in. This prompts her into believing he has more fun than Demon Lords who just can fight strong people.. and she joins the village proclaiming herself to be Rimuru’s bestie.. and she gives Gabiru a proper asswhooping.. Finally! She decides to live in the village which Rimuru’s council tells him might invoke the wrath of the other demon lords.. but Rimuru is mostly glad he subdued this powder keg of a woman.

Overall this was a very fun episode that  featured a lot of callbacks, easter eggs, call references and I really do like the character of Milim.. She has pink hair so that already is a plus and she is a type of person I really like. A super strong character but lacking the right persona to  actually take full advantage of that strength. I really do like these types of characters as they allow for character growth without powers spontaneously manifesting.
In last week’s episode I also mentioned how I liked the growth of the town that once again is given some proper attention. The idea of making the potions one of their main trade goods is great and really ties in with the person Rimuru is.  Plus what we have seen before.. it feels well established and earned. Having Gabiru fail miserably at the task makes it funnier. Vesta being involved in the potions feels like poetic justice.. so from a writing perspective this episode does really well.

The brief moment of action was also very appealing to me, from Milim’s aura being something very monstrous and explosive to the fake out with Rimuru doing his honey summoning technique. My favourite bit was when Milim punched Gabiru in the face. That hit felt so viceral and the powerful glow she gets in her eyes makes her feel strong.. and similar to Rimuru in a sense.. there is a sense of a tale that still needs to be told surrounding that. I do like the human rendition of the lizard folks as well..I have a weakness for girls with tails or fangs, and while it is a bit of a shame to see them not depicted as Lizards anymore the whole Lizard look lacked the personality they can put into these humanoid forms.  I am not sure I agree with the idea of making her human as a concept..  but for me it did work. I have been known for not liking Lizard people too much though so that may be personal bias.  I do like lizard elements.  All in all I say this episode made a few clever choices that brought a lot of flair and persona to the table for some characters.

I dislike .. a lot.. that Milim wears a barely anything outfit… I dislike that they made Shion’s boobs jiggle in the hottub and I dislike that every female surrounding Rimuru has to be hot and judged by their breast size.  I get this will appeal to some people who like that kind of stuff but I found it obnoxiously present. If Milim is indeed so childish why not reflect it a bit in her outfit as well .. give her a more kidlike outfit.. Why does she have to show so much skin?! It seems to conflict with everything else about her. There is a hot tub scene where Rimuru is alone with the ogre girls and Milim and it feels odd. Shuna seems more uptight.. which makes sense for a princess ..but before she was depicted as more shy and very forgiving yet for some reason she is a real stickler against a demon lord swimming in a hot tub..it felt a bit forced to produce a boob joke later on.

While the storytelling of the episode is great and the visuals are mostly nice, I do think the second half of the episode drags on a bit. That is because this episode does a few “false endings” .. Rimuru says some words in conclusion of a situation that feel like an ending “And that is how a Demon Lord joined our village”,  “So I became besties with a Demon Lord” and the likes after which we mostly get just casual conversations between characters that do not really add anything. I do not mind the idle conversation but I would have placed the Hot-tub scene BEFORE the big speech so we can end on a high note.  Now I ended up checking the timeline twice to see if I had much longer to go because in the end I got bored and wanted the episode to end.. not because it’s  a bad episode persé but because they concluded the episode at the 16 minute mark and the final 7 minutes just give it episode length. It could have been mixed a bit better.

In the end I have a bit mixed feelings about this episode. In the end I think it is a fine episode because it very much did keep me entertained for the majority of its runtime. It just blew the final few minutes and I honestly felt there was too much of an emphasis on fan-service in this episode.  I wonder what the little slimes were around Rimuru when he was in the tub. Are they actual slimes or where they like bath toys? I am not sure!  It’s perfect light entertainment but it is also an episode that does not hold up when exposed to a more scrutinous eye.

As this episode most likely is aimed to introduce us to the known villains for the rest of the season we also saw too little for it to have properly done that.  Yet despite those flaws I had a lot of fun with new and old elements being reintroduced. The fact that Rimuru doesn’t always need power to defeat someone is great and the fact he has met someone stronger than him makes this world feel more alive.  So if you are watching the show still by episode 16 I do not think any of these offences it makes are unforgivable.. it just could have been done a bit better, which I know because the show has been better many times over. It does get a positive score from me..  but of the “good” scores it is in the lower range!

9 thoughts on “Animini: That Time I got Reincarnated as a Slime -Episode 16- Demon Lord Milim Attacks”