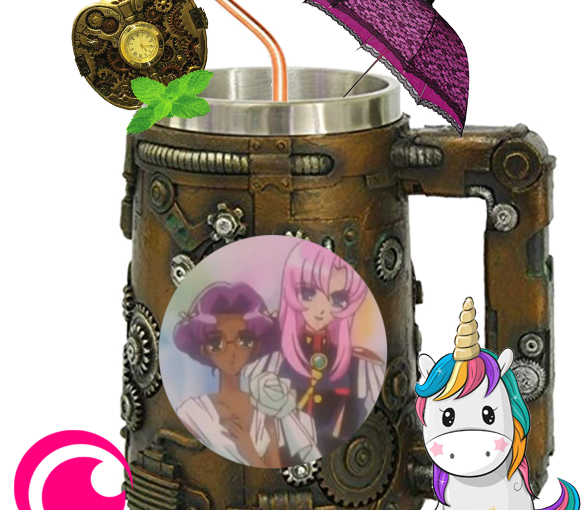 This is the first episode that dives a bit deeper in the social culture of the school! The theme is friendship. Utena wants Anthy to make some friends, who dismisses her claims of not having friends by saying she has Chuchu! Which Utena acknowledges but she adds a but everytime she does. Also showing Chuchu’s silly antics. Utena wants to make Anthy a bit less uptight and tells her to drop the honorifics around her! Unfortunately this fails to leave an when the entire school uses those same honorifics. Anthy tells her she has to because she is her bride. Utena doesn’t agree with that and says she might dress like a boy.. she still wants to find a regular boy. Really Utena?!  This for me feels odd, given how interested she was in Anthy in the first part and her self claimed mission is to be a prince that saves a princess. Before I had a bit of a role reversal fairy tale vibe and this moment really brings us back to the classical moment. Especially since she seems kind of, but not really ,  interested in Student Council President Touga Kiriyuu. Him having a ring really surprises her and makes her think he is her prince. Didn’t the green haired guy already tell her this?! Doesn’t he need a ring to enter that dueling grounds.. so would it not be clear there are more rings?!  Am I missing something here?! Why would she be into the kind of flattery he provides?! She snaps herself out of it to keep her image.. but it feels like she could go for this guy!

The second half of the episode starts with the introduction of Nanami , Touga’s sister.   She saves Anthy from being bullied, she informs the woman that she has been nominated for queen of the ball. Now I should probably think the student council and the battle of the rose has anything to do with it.. but there was only one word that popped up in my mind. Carry! Anthy will be bullied at the ball. I just knew it and after a lot of social debate whether she should go or not, that hinged on if Utena would come along in her Frilly dress or not  that’s exactly what happened. WHile Utena is distracted by Touga it is revealed that Nanami is jealous of Anthy as her brother keeps talking about the Rose Bride.. and she wants to embarrass her. So she gave the woman a dress that dissolves when it gets wet and spills champagne all over Anthy. Seeing her friend in trouble, Utena tosses off her dress revealing her male uniform beneath it. She struts to a now naked and embarrassed Anthy and pulls a tablecloth spilling all the punch and snacks!  She puts the table cloth over Anthy which becomes a pretty white dress! Together they dance and give Anthy a bit of a nicer social evening, while Touga gushes over Utena , Nanami will exact revenge upon her.

There was a lot to like about this episode! Utena being forced in a dress is the first time we see the character really outside the comfort zone. She has always stayed quite composed  even when it was announced Anthy is now her fiancée .  She just ignores it and cool headedly walks on. However walking around in a cute pink frizzy dress sends her over the edge a bit. We also see her a bit embarrassed by all the flattery of the girls earlier, so it is quite nice that for once we don’t just see “powerchick” Utena. Her concern for Anthy’s lack of a social life is nice as well but it would be more compelling if we see Utena do fun stuff with her friends before. Now we mostly see her classmate and friend bother her a bit and nearly kill her  by jumping on her back while Utena is looking at Bishounen Men!  Still quite cute and it makes her such a good guy character.  I also really like how she still refuses to play by the rules of some silly game, even if everyone else takes it super seriously. She lacks the context so she doesn’t believe in it.  The mystery of the rose ring is kind of being made more compelling as well now.. though I really think she should have noticed the ring on the green haired guy as well! From a narrative stance I also like Nanami as a rival of sorts. The game of the rose kind of made this a bit tricky before, as everyone just plays so neatly by the rules there was no sense of a threat. While petty pranks might not be severe it at least adds some tension!

What I like best is the second half of the episode!  It’s great to see this type of show deviate early from the “monster of the week” format. It could have been easily done that Utena just has to fight duel after duel and I had come to expect that and this episode shows me, it doesn’t do that. There are some heavy cinderella vibes in here as well and I really like fairy tales mixing with anime! This episode really warmed my heart.. mostly. Utena just doing right, the cute dance scene. Even that weird Black Butler like.. voila.. this table cloth is now a dress , thing.  I really dig it and enjoy myself just watching stuff unfold!  A lot of stuff happening is really pleasing to me! I am enjoying myself.. yet I do not find myself as captivated as with other shows still.

I oftenly measure how good I think an episode is based on the number of times I made a screenshot! I do that as I watch I just capture the screen a few times. The less I do this the more engaged I am.. sometimes resulting in the relatively bad screenshots! As I have little to work with! Utena however I consistently have lots of screenshots for and the reason is .. I am not THAT engaged.  I am having fun.. but I am not sucked in. The feeling stems from what I feel like is a bit of an inconsistent main character.  The first episode I could have sworn Utena was all over Anthy.. now she almost takes a motherly role, while in the second she takes a shine to Chuchu more then to Anthy..but Chuchu sleeps with Utena?!  She wants to find a boy despite her mission of being a prince ? She also wants to find her prince?!  THat is not really what the opening narrative told us.  I get why.. because the prince depicted in the story is clearly related in some shape or form to Anthy.. having the same skin tone and almost the same hair… but this is why I do not believe this curveball works! At all!

When I compare this to Cowboy Bebop which I will classify as Timeless, Utena has a much more 90’s feeling into it! While seemingly having a progressive message, I find the story telling to be less careful. A dress that dissolves when wet?! I have never encountered such a thing .. I am sure it exists but would you not feel something being off with the fabric.   While I get why Utena thinks Anthy has friends, why does Anthy blindly trust in the legitimacy of this?! Touga’s design seems quite Pegasus like (the yugioh guy)  it might be because of his mysterious council and the dark music that plays around him but I can NOT see him as a viable partner for Utena..all the warning flags are up that he will not be a good partner for her. If it turns out he is good and being her partner I will stand corrected.. but it feels so telegraphed that it’s not.. so I am not invested in that fake out! One again this show is very obvious and I am not sure if that is my thing.

On the one hand I got a delightfully entertaining episode that on it’s own kept me quite entertained. Without having seen the opening, without having heard the villainous music that plays when he is sitting with his council members, without his fairly evil-like design I might be into this more. If the show is teaching me not to judge a book by it’s cover by baiting me into believing he is a bad guy…credits to them! It is working! So maybe this is really good..  The story beats this episodes follow on it’s own are great and the Ballroom dance was quite touching! I was happy to see Anthy smile like that and to have fun with Utena at the prom! I even liked the introduction of Nanami.. it prevents the show from becoming mostly a “boys versus girls” type of show. I also like the Oujousama type and she seems like she just might be one!  I am curious to find out what happens with her.

Yet I can not shake this feeling the show isn’t doing enough to keep me pulled in. I feel adrift , not knowing what to expect from Utena because I ‘ve seen three pretty different versions so far.  Some choices the show makes are seemingly too obvious! I might be deceived here.. but if I am not.. they are really not doing well on the subterfuge end. It’s like having Maine Qaraqtar as a lead.. and she has two options for love Rho Mance and  Red Harrington.  Then you ask your audience to be engaged with the “totally real” romance between Maine Qarqtar and Red Harrington!  Yeah Right! I just don’t believe it. Regardless of the show is fooling me or Failing to fool me, the fact that I don’t buy Touga x Utena knocks this episode down to just being fine.

5 thoughts on “Animini: Revolutionary Girl Utena – Episode 3 – On the Night of the Ball”