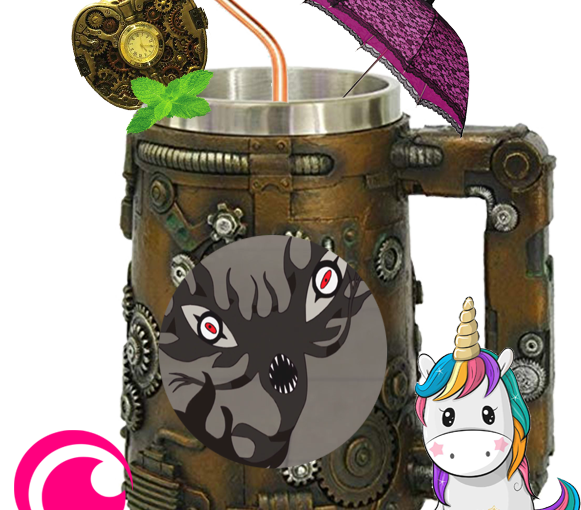 Greetings my sweet Island Guests, the animini cocktail shot we will serve you today is two parts delusion, a dash of Groundhog day with a healthy splash of epic reunions. A strong episode of a strong series so far, yet the taste is a bit washed out by using some tropes a bit too much! Luckily the Dr Strange like action made up for a lot.

At the end of the last episode we saw Taichi’s group traverse a tunnel and end up in what seemed to be Tokyo and that is where this episode picks up.  The kids are back in Tokyo but things seem strange, there doesn’t seem to be any mention of the blackout and the kids cell phone will not connect. Excited however to be in the real world again the kids decide to visit their homes for a bit. Mimi being the most excited, wanting a shower and some change of clothes as well as going to a luxurious burger restaurant to have an Avocado Cheeseburger. Since Mimi lives in Shibuya the group has to split up! On the subway to their home though Koshiro and Taichi begin to feel worse. Why isn’t anyone talking about the blackout , why do they ignore the digimon with them? Things seem wrong. They are so locked into thought that they miss the next station they visit, Shibuya station.  The station they just traveled from. Meanwhile Mimi can’t seem to find the exit of the subway station and keeps ending up at the same map,  when she sees a Jack’s Burgers restaurant in the station. When the server glitches out , Mimi is pretty sure something is wrong.

The boys finally discover their train is looping as well and they get out. They find themselves in seemingly shrinking station loops happening more frequently. Relying on Greymon the group manages to collapse some of the area they are in and get out.  While it still looks like Tokyo the presence of a Digimon, who is scattered all around makes them realise they are still in the Digital world. A champion level Digimon called Eyesmon has copied it and can use it as his weapons to fight the Chosen ones. He proves to be such a formidable foe that even in their ultimate forms the digimon of our three heroes do not stand a chance. Just when  Eyesmon hurls three oil tankers at Metalgreymon, Lillymon and Atlurkabuterimon, they are held at bay by Garduamon, Zudomon comes in carrying Weregarurumon and destroys the tankers. Now united all the six chosen ones fight against a monster who can literally toss skyscrapers in their path. This champion level digimon has absorbed so much data it became this powerful. With a combined team attack they do manage to quell the danger. When the kids notice the blackout in Tokyo is still happening we see a few parts of eyesmon that did not get destroyed connect together again and it seems to digivolve into Orichimon.

I love Mimi so much in this show! Her and Palmon’s interactions are hilarious! In this episode she also takes a starring role for me. The petty quest for an Avocado Cheeseburger is not something she gives up! No .. she let’s that desire empower her!   Seeing Palmon and herself in danger , she swears to Palmon she will take her to the real world so they can enjoy a burger together.  Giving her the strength to fight back!  Koshiro and Taichi are also  handled very well in this episode.  Taichi is becoming more of a leader noticing things are wrong in his gut, while Koshiro feels something wrong through contradictions seeing the world should not be like this.  When in trouble Taichi’s resolution is to power through and that is seen in this episode very nicely! I really love how the children are being handled here. Kari has a little cameo here which makes me wonder if she will come to the digital world. Takeru is shown with Palmon in the outro so I am pretty sure he is coming but Kari remains a bit of a mystery.. which I like!

The music and the battle here steal the spotlight in this episode. It is really great to see the group together again and see them combine their powers.  With Eyesmon shaping and twisting the city around them it is a very interesting fight as well. Metalgreymon crashes into a building so when Atlurkabuterimon leaps over the next he finds out there is a subway on top.. Lillymon gets struck by a plane.  Eventually the fight ends in complete surrealism where the city is formed into a sphere around the hero monsters. The music to accompany this all is great and it is done perfectly. It also works as a nice summary to see what everyone can do, and we see exactly how small Lillymon is next to all the other Ultimate digimon because there are a lot of great shows that offer us perspective! I do like these visual little things and it is one of the best fights yet! So on the action and personal front it was a great episode.

The scenario though is very bland, an illusion that keeps looping itself and where there is no escape. Star Trek Holodeck much?!  This thing has been pretty much done to death and this episode doesn’t really do anything new with it. The worst thing it does is forcing characters to be dumber than they are. I praised this show throughout for clever conflict set-up. What the characters did they were forced to do for valid reasons, here not so much.  Koshiro would never board that train without asking people about the blackout.. but no of course they have to seperate from Mimi first so questions aren’t asked until Mimi ate her burger so they could sneak in a creepy visual and get the more satisfying reaction.  I am fine with how Mimi is portrayed except that I would think she would notice her phone is dead too.. she probably would not take a subway back but ask to be picked up..if she needs that change of clothes so much. Maybe she grew who knows.. but it does feel like characters make more leaps to fit the story.

Furthermore I do think if you are going to use a location that loops, use something is a bit more visually impressive than a subway station. It does work better because everything looks alike .. but we are forced to believe this sequence of events based on a similar map on the wall. I assume a subway station has more maps. Why would they be able to travel to Shibuya but not from it.. why would the evil digimon know they are heading to Shibuya. There are several things off with the story here and while it isn’t anything horrible the show has shown it can set up conflict so much better. While the fight is very epic,  the escalation to it was very lackluster to me. It just isn’t executed well at all.

I was doubting between an Okiwi and a Fineapple here and I decided to settle on the latter. Yes it has a lot of sloppy writing, forced conflict  and even the rare character contradictions and it seriously insults the intelligence of any of the chosen ones.  Mimi doesn’t notice a Burger Restaurant just magically appears?! Okay she was hungry before.. but after she just shrugs it off.  No it isn’t nearly as well written and clever as most of the other episodes, while I think a Champion being this powerful is cool and needed to set up for Devimon later on .. it also kind of shows that you made a mistake and had to write an out!  It does show.  Yet it all feels slightly more irrelevant to me this time around because I still had so much fun.

The moments the characters DO act in character are strong, the action is sublime and the music is timed very well.  The Dr Strange like citybending and the weird eye filled version of Tokyo gave everything such an unique vibe as well. Kind of like those areas in the first three Digimon episodes that I loved  so much. I may not be convinced that this is how this scenario would play out had everything prior actually happened but I was super entertained. Like a toddler clapping at tv for seeing a fun colour combination they do not understand properly. I felt that kidlike joy that I also felt when watching the series when I was an actual kid. That in itself is also worth something I’d say. So while it is one of the dumbest episodes so far. The fact that I remember more cool scenes than poorly written episodes from anime in general makes me rule that this episode is quite alright.