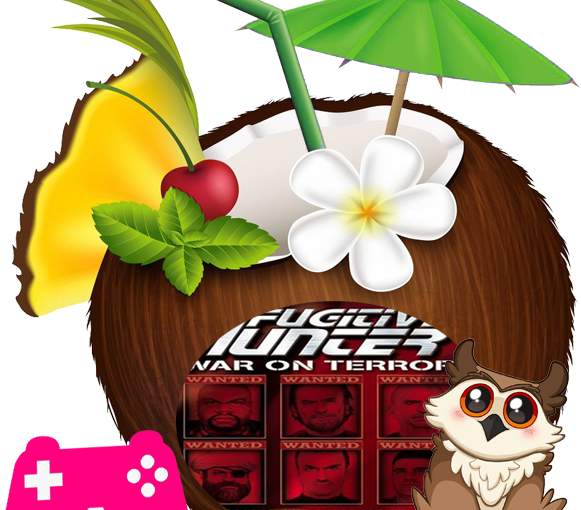 When I’m not cleaning out pool filters or checking the water’s PH levels I can often be found organizing my bad games alphabetically. Fugitive Hunter can be found under the letter, F, not for its name but because it’s Fucking dumb.

For nearly two days I had absolutely no notes on this game except that is was mind numbingly stupid.

But that would be letting it off too easy.

Developed by Black Ops Entertainment – a gaming studio developed by four dudes that somehow graduated MIT. The game was published in 2003 by Encore Software – which looking them up – really doesn’t seem to deal with publishing games very often. As they shouldn’t.

The shear amount of ways to attack this game are almost overwhelming. It’d be impossible to cover everything that is wrong with it, to be honest. So I’ll just start at the macro level.

There are different types of terrorism. You have Narco-Terrorists (Cartels, traffickers, drug kingpins etc). There are politically motivated terrorists.. like the IRA. Then your garden variety (choose your religion) extremists and lastly there is a much less violent form of terrorism. A slow, bloodless coup of sorts. A war waged on the mind. Intellectual terrorists like the idiot, Bhad Bhabie or the Kardashians. Stupidity and pointlessness of such a dangerous scale that on a long enough timeline begins to indoctrinate an unsuspecting mind. Thats the territory the minds behind Fugitive Hunter belong to. Intellectual terrorism.

Now that might seem a bit harsh but it’s how I feel.

Post 9/11 America was a weird place. Nationalism was at an all time high and I fucking hate nationalism. Every day in high school for lunch you could find yourself cornered by a recruiter for the Marines or Army. The more punk or alternative you looked the harder you were pressed. You couldn’t drive to the store without hearing a country song about kicking, “Usama-Obama-Ali-Muhammad’s ass” and every fucking Football game would have Jets fly over it. Because that’s what America does. We pay for Jet Fuel to fly over football stadiums instead of housing for the homeless people freezing to death outside of them.

So… I hated the ultra patriot bullshit back then as it is and Fugitive Hunter is the perfect reminder as to why. Macho-bro-American-flag-waving-bullshit. It *just* falls short of satire. If only the writers were just a bit smarter. Or didn’t actually believe the shit they were spewing.

Thats to not say it doesn’t have it’s funny moments. Objectively – fist fighting Osama Bin Laden in an arcade type fight is ridiculous enough to make anyone laugh.

Outside of that however the game just tries too damn hard. It just wants to be cool so bad. It’s really kind of sad to watch. Fortunately, it even seems like the developers realized about halfway through the game what sort of monster they have created and wrap it up abruptly. You can basically beat the final four or five levels within an hour and a half. It’s almost as if one of them woke up and really re-examined their lives.

As far as actual gameplay is concerned it is a First Person Shooter without an aim button. So that should sum up the mechanics of the game for you pretty well. The enemies respawn at a maddening rate – usually directly behind you. All great fun.

The dialogue is basically non existent and when it is there you wish it wasn’t. You can’t make it through a level without the main character tauntingly saying, “Yo Mama” to an enemy he has gunned down at least 15-20 times. The sound is awful. The music is shit. I’m pretty sure Dr. Dre and Eminem could sue them for ripping off the main chords/music to, “Kill You” off the Marshall Mathers LP.

The graphics are awful especially for the time it was released. It’s almost as if this game was created to be bad.

And then it struck me. Like a bolt of lightning – electricity traveling through the universe landing in my head and shooting out my fingertips. This game WAS created to be bad on purpose. This game is a weapon of mass disfunction.

Get this: Did you know Osama Bin Laden was not only big into pop culture but also anime and gaming? When the CIA released more than 417,000 files from the Bin Laden raid he had massive collections of anime, emulators and games. Even popular first person shooters like Counter Strike and Half Life.

So maybe… just maybe … back in 2003 when the government (that can see through buildings from outer space but inexplicably couldn’t find number one most wanted man worldwide, Osama Bin Laden) had to unleash the ultimate weapon. They would feature him in one of the worst video games ever. That would surely flush him out. Right? At the very least bring him to the brink of suicide. A fate deserving of such an evil man. – Periwinkle

(Definitely DON’T) PEE IN THE POOL

1.) A small chunk of fur from Parka (Cold Winter)

6.) An impossible to control Q-Tip (CSI)

7.) The tooth of a terrorist (Fugitive Hunter)

Follow me on social media if thats your thing: https://linktr.ee/DarkCorners

Definitely not the reason I do this BUT if anything I write brings you joy and you felt like buying me a cup of coffee I would wholeheartedly appreciate it. https://ko-fi.com/colinsik

5 thoughts on “Fugitive Hunter – A Game About Terrorists..Made By Terrorists.”