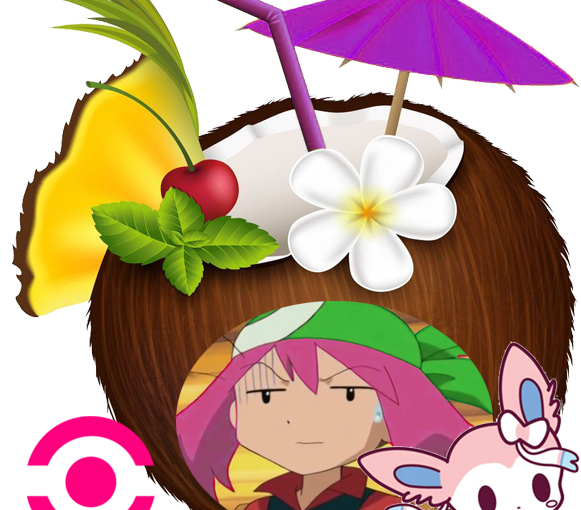 Hello my Little Lights, I am back to playing Moemon Emerald, having lost Sakura last episode I have recovered well enough to brave the trails that come next with my magical girls?! How did Sakura die?! Well she fainted in the last episode during grinding .. and in a Nuzlocke when a Moe or Pokémon faints they are considered dead.  Read more details in the last episode! Which you can find at the bottom of this post! Today we are headed for Slateport  and hopefully all the way up until our next rival battle!  I haven’t played this in ages though.. so I am not sure what we will encounter! I do know our episode will start with a challenge on the beach!

The Battle of the Beach Club

The Boat arrives at the beach of Slateport, a beach that is littered with trainers! I am pretty sure I get an item if I beat all the trainers here…or at least I think so.. so I challenge the first sailor I see. He calls himself Fisher Marilyn, his first Moe is a Minun.. since I lead Asuka.. it immediatly is a harsh reminder of our loss. Sakura would be so good against this. Right now the best swap is to switch in Jigglypuff again! His second Moe is a Graveler which  means I swap in Souji.It goes off without a hitch.. but then I get ambushed by a girl hiding behind a Parasol and I end up in a double battle! It makes sure Asuka is double attacked and takes some heavy damage with Souj taking out a Wailord leaving a Hypno alive. I decided to let Asuka use a Milk Drink and then I realised I read it wrong. It’s actually Souji who took the damage.. luckily everything ends up okay. But… stupid as I am .. I stumble into another double battle!…Fuuuuuu. Souji levels up but Miku needs to save everyone again!  She isn’t leveling fast  though!

My team ends up being so hurt that I have to go heal in the Pokécenter.. on my way back I decide to visit the Moemon Trainer Fanclub… which is kinda creepy! One guy offers to teach me Flame Wheel and Asuka can learn it.. so she learns… .Aerial Ace.. Oh.. that is weird! I knew Moves were randomised but I did not know static moves were replaced as well! Oh well at least Aerial Ace is more reliable then Sky Attack. We easily wipe most of these teams because they are at a kind of wimpy level!  I really expected trainers to be a bit closer to the gym leader but oh well! It will get through fast enough I bet! The Tate and Liza leap later on is huge anyway! We defeat the cutest little Voltorb.. BAM! It’s dead now! I win every battle of the battle of the beach and win a case of Soda Pops.. that might seem like a lame prize.. but in a Nuzlocke.. this is a godsent!

Pirates of the CariHoenn .. At Chores End

I go to the shipyard to deliver the Devon Goods but it turns out that the guy whom I have to give the package too is at another location and this guy that tells me also tasks me with delivering the parcel to this new location! …. So let me get this right! .. I SAVE your goods.. then as a reward you gave me a cheap cellphone.. then force me to go on a boat with an old guy  drooling over little girls… and I AM!!! A little girl! Then you make me deliver a parcel…but also force me to deliver a LETTER as an extra stop that forces me to venture to a Moe filled cave.. including insanely powerful ones like several Mewtwo and Moltres..then when I get the package on the location.. you ask me to go out of my way and find the guy in a museum or something?!  And I have to pay my own entry fee?! Jeesz .. no deed goes unpunished I guess! Reluctantly I head out.

Once I enter the Museum I see it’s taken over by an evil team….HOW HORRIBLE are the people in the pokémon world actually! The Museum attendants could have told me.. hey kid.. there is like a hoard of pirates here.. you might want to come back later… or HELP US an evil team is everywhere you are a trainer perhaps you can help us come in for free! But Nooooo Pinkie has to pay! Frick! How rude! The team seems to be quite nice though! The guy I beat earlier even gives me a move.. I wonder what it is! ….Sonic Boom! Huh! I am not having any luck there.. I am not using the two letter term because google docs shrinks it down to a trademark logo. So yeah! Sonic Boom only and always deals 20 damage.. but in a randomiser with full evolutions everywhere this move is worthless.. the only one who could use it was Sakura. Sniff.. I miss Sakura!

As soon as I go up the second floor of the Museum things change though! Team Aqua attacks as I want to give Mister Stern his stupid package.. now they want to take the items and since Stern doesn’t have any Pokémon on him.. I have to stop them!  I better get another reward for this! The Aqua Grunts are easy, but they are catching up in level very fast! They already use level 15’s.. then Archie the Pirate leader shows up and asks me if I am part of Team Magma.. What is a TEAM Magma?!  Why would they accept a 10 year old in their ranks! I fully expect to fight Archie as I am pretty sure I will fight Maxie in the Museum in Pokémon ORAS ..  but no Archie just bails. Finally something went my way.. time to get my reward…. a thank you from professor Stern.

I stomp outside and am greeted by a weird person named Scott! Scott wants to be my friend! He says he wants to follow me around… Scott is a grown man .. asking a 10 year old girl to follow her around! The HECK is wrong with the Pokémon World.. I mean sure I made the world a bit creepier by turning Pokémon into little girls.. but even then, people really take advantage of Children here! I guess it is time to go up North and find fame and fortune for myself! I stock up on a few super potions, and status healing items as well as five great balls!  Then it is time to leave this harbor town! Scott comes out of the battle tent and tells me if I want to try it! No.. I do not! It’s not that I don’t find it fun.. but it doesn’t do anything for the Nuzlocke and I can follow the rules there! So I am skipping it!

Encounter-Encounter-Encounter! I get a new Encounter!  I dive in the grass right away!  To find out what it is! I have a few great balls so catching should go smooth if I lead Miku! Using Flail she will not oneshot anything! Big Brain plays! It turns out to be a Tentacruel.. which is not bad. I name it Ika-Chan but decide to leave it boxed right now. Tentacruel is a bit of a tank and with Jigglypuff on my team I do not have a need for that role as for now!  Corphish will be a physical attacker when it evolves (if it would learn physical moves)  which is a much more needed thing in my team as Usagi and C.C are very much special oriented. Murmur right now is a physical attacker but her specialty will veer of into special.. She might get booted off the team if I get a better Earthquake user.

As I move one a fat guy ask me if I have seen his son.. I tell him I haven’t and that I do not like to travel with boys! He acts surprised but says it is okay..giving me his phone number.. Okay thank you professor!  Let’s move on! I decided to hunt for items first on route 103 and I will briefly visit trick masters house as well. I want the items! They can be valuable! Asuka struggles in her fights.. but she manages to reach level 20 and evolves! She kind of likes pretty now! On Route 103 I also encounter a Lax Incense, an item that allows attacks to miss one of my Pokémon more often! I give it to Usagi! She is my dearest baby after all! Any attack she can avoid will be great! Miku now gets the Amulet coin! Trick Masters house is a puzzle house in the game that allows you to use your HM’s to solve puzzles.. a few good items are hidden in there… which for me now got randomised to berries. Everyone except for CC reaches level 20 with Miku and Usagi even reaching level 21.  The only one learning a good move is Murmur who learns Hyper Fang instead of Vice Grip!

Time to move up route 110 and fight my Rival! Brendan who likes to be called Bug Catcher Tia this time around .. is known to be the weakest rival in all of  the games and should be super easy…NORMALLY…  The first match is Gardevoir versus Primeape!  Okay That one I will easily beat.. but his Pokémon is level 18 already so it’s up to par with my team!.. Gardevoir should outspeed Primeape.. but it has Huge Power  and Starts with Protect.. I C.C. Should be able to live a fighting move from PrimeApe she is quad resistant..to fighting after all.. This wasn’t right! In this game Gardevoir is just a Psychic type.. it would not have mattered though.. Gardevoir  is killed by a critical hit after missing her own move.. Darn I was getting quite attached to C.C. .. this is a problem.. Primeape can kill Jigglypuff as well…

The only Pokémon that might kill it is Fearow.. IF it doesn’t outspeed me.  It does.. but Primeape goes for Focus Energy .. Aerial Ace is Super effective and finishes it off! Baltoy comes out.. and is easily finished off with Octazooka from Souji! My heart drops when I see Brendan’s last Pokémon…crabcakes.. he has a Lugia! Please don’t have Focus Blast! Miku I choose you! Lugia had Psycho Boost.. if I would have not had Miku.. I might have lost here! Lugia gets Crushed by Crushclaw… but I get Crushed by the loss of C.C.

C.C. was given a viking funeral on route 10. I asked Asuka to set her boat on fire with a Flame Wheel.. but since it was changed to Aerial Ace her boat was whipped away on the wings of friendship! As her body disappeared on the horizon, I noticed my heart already began to harden a little bit.. this death hurt less than Sakura’s… this journey would change me!  I already began to wonder if we should use Ika-Chan on the team.. but doing that would make my team EXTREMELY weak to most types. It will also be a hassle to grind her up! So we will wait until we get to Mauville!  Check out our encounters in that area near the daycare. That will determine if we will continue our journey with hope…or Despair.. but that is a tale for the next episode.