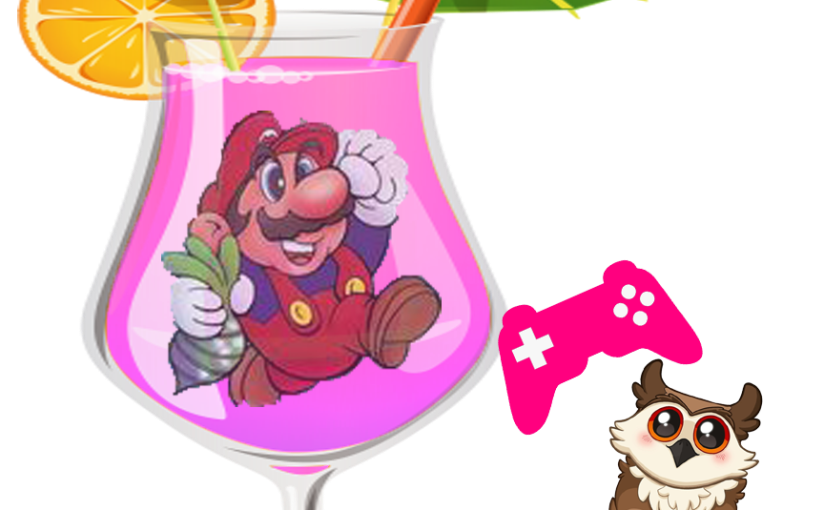 Now that I have cast the TALDIG aside and no longer try to teach people bad history trough mediocre video games, instead I will play some retro games I REALLY want to play. We start with one of the few main line mario games that I never finished. Today I take a look at Super Mario Bros. 2

Doki Doki We Know This

Now I assume most people know this but we need to go over this so you know what I am actually reviewing.  I played and completed the western Super Mario Bros 2.  The game that Japan knows as Super Mario U.S.A. Should there be someone out here reading who doesn’t know.  When Nintendo released their Super Mario 2, people thought it would be to difficult for your standard Western audience.. and having played it myself.. I can agree to a point. This would have polarised the american and european players. In order to still release a new Mario a game called Doki Doki Panic was given a bit of a Mario overhaul.  The original game had you pick from a quartet of arabian/middle eastern looking characters, which explains why you see so much desert levels and fly on a carpet so much.

It is also why this game does not feel like a Mario game. The mechanics in this game have never really been used after that anymore. You could attack by throwing vegetables  or throwing enemies after jumping onto them and picking them up. So one can make an argument that this is NOT a Mario game. However this game gave us so much of the super mario culture we know today. Shy-Guys, Pokey’s  and even Bob-ombs would not have existed without this game. Well .. at least not as Mario enemies and some of it’s most iconic music would also be missing. Most importantly.. without it most likely we would not have the Super Mario Brother Super Show.

So for the first time I played the game and moved past the third world.Which was  where I left before. This game can be fairly difficult and cryptic at times. At least for younger gamers. Where Chibi-Pinkie  believed in being an absolute murder hobo when it comes to enemies Super Mario Bros. 2  requires you to use certain enemies as platforms or ride projectiles. There even are some minor puzzle elements on how to use bombs to blow up certain obstacles, factoring in distance you have to cross. It’s nothing special but it’s very different. Much like how Zelda 2 veered very much from its original as well. While Mario Bros and all subsequent games are pure sang platformers, this one is more of a puzzle platformer. One that is fairly stingy with its resources.

As a result this game is fairly, but never overly, challenging. The problem some puzzles are trial and error and on rare occasions this can softlock you into losing a life. This would not be that much of an issue if lifes were made more available. Super Mario 3 did that very well. Handing you 1-up mushrooms in the more trial and error like stages. This is a bit more relentless. I recommend playing the GBA version as it has a save function. I think the Super Mario All Stars one has one to,  but that is definitely welcome. You have two continues but given that most 1-ups are hidden behind RNG that still is harsh. There is nothing fun, nor was there ever about hitting a game over simply because you did not have enough lives to “learn” the game, being forced to start over. Luckily trough emulation.. and mini consoles we now have acces to save states which can help you deal with this gripe.. or you just play the superior ports.

Now don’t get me wrong this IS still a fun game to play but over time it has gotten some vastly superior versions.  Since the NES version is just a sprite swap in most senses of the word, it feels more “floaty” than other Mario games, Controls do not feel as tight. The Luigi Jump and Peach abilities do contribute to that.. and of course since she is pink I cleared the entire game with Peach. I have no trouble landing on a single block in any mario game, yet in this one I could rarely pull it off. As if there is a landing delay, which feels very un-mario. That being said the stages are mostly very well designed around this control scheme so it never killed the joy for me. Just in the core you can sense you are playing Doki Doki Panic.

It’s a Me REALLY!

Everything actually Mario, everything rebranded everything first party however feels great. The game oozes personality and much more than Mario Bros. feels part of the mario world. By now Mario had more personality he dons his actual red and blue colours rather than that brown jumpsuit. Peach, Luigi and Toad are actual characters here. I love the music and tossing an Ostrich is legitimately quite funny. I loved whenever I could do that and just waste my time respawning them and trying to kill as much things with a single ostrich thing as I can. I am even considering playing the GBA version to hunt for the red coins .. because I heard it could unlock Yoshi which seems like a fun addition. Also I really want to do a toad only run!

The reason for that would be the games ending, this game is infamous for being only in Mario’s dream.So I would really love for him to have a dream about Toad Pickup up ostriches going around beating up  pink transgender dinosaurs and beating the evil king to save a group of magical bees or something. This game introduced Birdo one of the first Transgender video game characters ever and we beat her up a lot during this game.

The game has seven worlds each with three levels. The first two levels of a world almost always face you off against Birdo in the end.  Even in some final levels she can sometimes be there as a mid boss.. or as a  means to use her eggs as platforms towards a new part of the stage. Still I wonder what would cause Mario to dream about a mushroom kid beating up the transgender Birdo and take down an evil toad (as in frog ..not mushroom.. confusingly enough)  to save some magical bees. But hey its my head canon now which is awesome so thank you Mario 2.
<Disclaimer.. I do not approve of violence against Transgender in any shape way or form, nor do I ship Toad X Mario.. I just really enjoy the fever dream fantasy. scenario.. thank you>

While this is in fact my least favorite mainline Mario that is rather a testament to how incredible the series is rather than a strike against this game. The first half of this game is truely amazing and just a joy to play.  A bit like Mario Sunshine the second half can get a bit “stale” where the difficulty picks up to something that feels more tedious than challenging.  Each door for example is a checkpoints, some later levels just challenge you by having doors further apart  or let you collect an item on the far left which you then have to bring back to the far right. Instead of jumping to the next platform we have to use mushrooms to build our own way.  Which could be nice but across game over and continues and regular loss of life stacking the thing over and over again can feel more like labour than a challenge.

Again like Mario Sunshine (which is my second least favorite Mario by the way) that however gives  this game it’s uniqueness. I was much more inspired to try hard in this game than for example in Mario 1 or 3 where repeating stages feels less cumbersome. Where in Mario 1 I could turn of the game and say.. i’ll try again later this was the game I was really determined to beat. I wanted to conquer it and see all the worlds. Mario 2 is much more diverse compared to its predecessor at well, though there is some looping stuff after the fourth world. Out of the seven worlds only world six I sorta disliked while in Mario 3 there are two worlds I sorta dislike. So all in all this had a strong line up of levels and ‘puzzels’. It’s not bad yet overshadowed by greatness.

This game is often called the black sheep in the Mario Line up and I do not think that is completely true. It’s more that annoying sheep that doesn’t really stay with the heard.. the one that always wanders aff and is the most mischievous doing some pretty weird things for a sheep. Yet for that very own reason you do always remember that sheep and tell your wife in bed about what that sheep did today. It’s a loveable odd piece of gaming memorabilia that has just so many good stories. For example the Koopa Shells in this game used to be Black-Faces you can toss as a power up. Controversy around those arose which may have led to the idea to make that particular game Mario. It already needed new sprites for the Western world anyway?! Could that be what made it ideal choice to be the new Mario? The other game was too .. controversial anyway.

Where would Mario be now without the Shy Guys and Pokeys, what if those masks  never inspired the sun in Super Mario 3. Without this game Pink would have never been able to hover with her dress and Luigi would not jump higher and floatier than Mario. Which proves just how powerful games can be. Mario Mario would not be the man he is today without this game.Luigi Mario might never have differentiate from his brother without this game and the mushroom kingdom these days is hard to imagine without bob-ombs or shy guys. I still hope that Wart makes his return to the realm one day as well because honestly he fits in quite nicely… not the bees though.. not the bees. We later got better bees , mostly in Super Mario Galaxy.

Like I mentioned this game heavily inspired the super mario cartoon which I hold fond memories of because of how campy it was..just a guilty pleasure and in a way this game is very much like that show. We all can tell it doesn’t feel exactly like Mario.. but still it is such a part of it’s history that we just can’t help but love it. I mean mario’s canonical voice comes from a mini game collection featuring go fish so why not embrace this part to the fullest as well. Yes it’s the least good part  of the series, but people treat it like that is a bad thing… yet there is always a worst part.

If there would be one Mario game.. that would also be the worst game. It doesn’t say anything. Well maybe one thing? If you actually enjoy this Mario, there is so much more out there for you to enjoy. I had a great time with this game. Frustrating sure.. I said some very unpink words.. but so did I when I played Shovel Knight or The Messenger (great games btw). This is not the game you play because you want to play a Mario game… this is a game you play because you love Mario and that is A-okay!