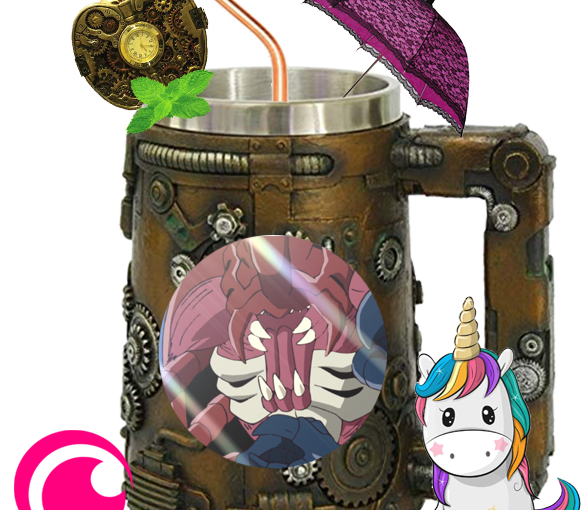 Steamy Salutations my readers… and yes I do mean steamy in strictly the vaporised water way! It has finally happened. After 14 episodes we finally see Kuwagamon. The classical first episode monster from the series now only rears its ugly head in episode 14 in yet another very good digimon episode. Yet little things for me held it back JUUUST a little.

It’s an even numbered episode number so we change back to Taichi’s group and will most certainly see Tentomon evolve! The episodes do not even try to hide it.. and that is fine.. we are here to see how it happens. Which becomes obvious fairly quickly. The group has to navigate through a maze of canyons. Encountering all sorts of weird materials. Surrounding by the high and tall cliffs the group can not use their digivices to communicate because of blocked reception. While this has been built up I do kinda wonder.. how the group can communicate across different worlds.. but not through rocks.. but who knows they might be made of a special material.  While Mimi has a lot of fun with some mirror rocks.. because of course she likes mirrors, Koshiro’s laptop breaks down. No longer able to analyse anything he feels rather useless to the group, which becomes even worse when the group is ambushed by a pack of Kuwagamon.  The group suddenly struggles to fight a bunch of champion level digimon, which seems kind of odd.. when Koshiro realises.. these attack patterns are not random.. These monsters work as a team.  They are quickly overwhelmed and have to flee.. only to realise.. this was part of the Kuwagamon’s group hunting strategy.. they fall into the claws of the ultimate digimon Okuwamon, the evolution of Kuwagamon.

The group gets overwhelmed even more and separated in their fight with Okuwamon. Taichi and Mimi do not let their digimon go into their ultimate form… for some reason, I think because of the lack of space or a clear strategy..maybe from sheer confusion.. but either way Koshiro gets seperated.. now further away from the group with no idea where they were and no way to analyse a proper strategy. When Kabuterimon is about to be killed by Okuwamon .. after a lot of self doubt the digimon ensures his partner that Koshiro still has the tool that makes him the greatest.. His brain. Realising he used his laptop top much, Koshiro uses his tactical mind to get Kabuterimon out of a hairy situation.. freed from the negative thinking and with a sharp mind again, he is able to super-evolve Kabuterimon into Atlurkabuterimon (which is the Japanese name for Megakabuterimon). Using his knowledge of standard bug behaviour, the attack patterns so far and the layout of the battlefield Koshiro comes up with a strategy that allows Taichi the time to Super-evolve Agumon as well.. and while the leader takes down the Kuwagamon.. Atlurkabuterimon faces off against Okuwamon and comes out on top!  Koshiro saves the day and Mimi tells him she is proud to have him as a servant as the episode ends.

Yet again this show really is good at establishing a good cause and effect chain.. Although admittedly not as well as the last episode, there is a perfect reason for Koshiro to face his trouble. Communications are out.. Koshiro’s tool is taken out of commision, he now finds himself in a tough spot. The idea of letting an enemy use a coordinated attack when the one normally coming up with the strategies is out of commision is a great way for Koshiro to tap into his own strengths! It really feels like a Koshiro episode  in it’s very core. From the enemies chosen, the hazards to overcome and a battlefield where he has the advantage.  His relationship with Tentomon has always been one of my favourites in the original show and that is not too different this time around. I enjoy their bond where Tentomon seems to really idolise Koshiro in his own way and that is brought up again here!  Using the battlefield to your advantage in battles is always a big plus for me as a D&D player who always looks for those kinds of things.

The second big thing this episode does very well is once more establishing all the chosen ones as someone unique. From the very first few moments where Mimi encounters a reflective rock all the three children see different things. Taichi sees a funhouse mirror and reminds him of fun times. Mimmi sees a mirror admires it for that.. something that reflects her and Palmon.. and while she also has fun with it.. it is much more from a vanity stance. Koshiro however sees the rock as something to analyse, an interesting anomaly. So even in little things these heroes feel so distinct from each other. Where the original story oftenly had the characters that were not Taichi and Yamato take a backseat. This constantly happens throughout the episode and other episodes as well. Such as Mimi instead of saying well done Koshiro.. saying “Great Job, That’s my Servant” because she still keeps up the Princess Mimi act. It just adds so much flavour. Of course bringing back the classic Kuwagamon is a strength as well. There is a lot of respect for the original as well, it just modernises it.. and speeds it up quite a bit!

The episode is not flawless though, more so than in other episodes this one takes a fair few conveniences. Like Greymon and Togemon not digivolving. I do get why Gremon doesn’t evolve.. they are fighting in cliffs of stone, his missiles could surely endanger them.. but Lillymon can fly and fight with kicks if she needs to.. so it would seem she would do well here.  Koshiro being separated from his friends as he did also did not seem to make a lot of sense. The show is smart enough to leave out what exactly happened but one moment he is with his friends, the next he is two minutes of flying away from them.. it’s odd to say the least and in an episode that is about logic, recognising patterns  and finding a way it all stands out. It never feels obnoxious but it feels as if information we needed was left out.. like important parts of the episode where cut.  Which ties in with my second gripe.

The knowledge Koshiro has while fighting his big battle seems a step or two , two big.  He knows how to distract the Kuwagamon, he knows where there are more of these shiny rocks besides the one they encountered. It feels like we miss a scene where Kuwagamon attacked a mirror instead of a chosen one.. and if it happened in the episode it was a blink and you miss it moment. That would be a great time to let him have a flashback.  Show us how he got to know this.. now it feels a tad Deus Ex machina.  Which isn’t helped by the fact that NOW Taichi can suddenly digivolve Greymon into Metalgreymon .. The episode feels, jittery.. as if I am watching a lagging stream. I have the idea I miss a few words or in another way do not get the full experience. The grey cliffs are also a bit boring compared to all the amazing things we have seen before.. and while they do make a good obstacle to overcome with logic it sometimes makes it hard to follow who is where exactly.

On Crunchyroll this episode scores a 4.9 out of 5 based on 316 reviews. Which is already quite telling that this is not going to be a bad episode. However I do feel this episode is a bit less imaginative than the others. It delivers on fan-service, it delivers on it’s goal and it does even tell it’s story in a sublime way.. it just doesn’t have as much fun with it  as something like the last episode or the Weregarurumon episode did.  Taichi’s group is having the weaker episodes. Which is kind of weird because I do like that group more than the other. Maybe I am holding them to different standards? Just this episode to me lacks JUST that bit of soul to be as great as the other parties adventures.

Koshiro DOES have by far the best adventure of his group though. I did not like the Metalgreymon episode and the Lillymon episode just left me feeling rotten, despite being quite good. This episode does everything the amazing episodes do just a bit less. The music has less impact, the story is a bit less creative and the set up is a bit too straight forward. In that manner this episode is like a german car, or anything german really. It’s super solid, it works and it works well.. it works REALLY well. It might work the best of all the super evolution episodes i have seen so far even.. yet in the end I just wasn’t as excited.