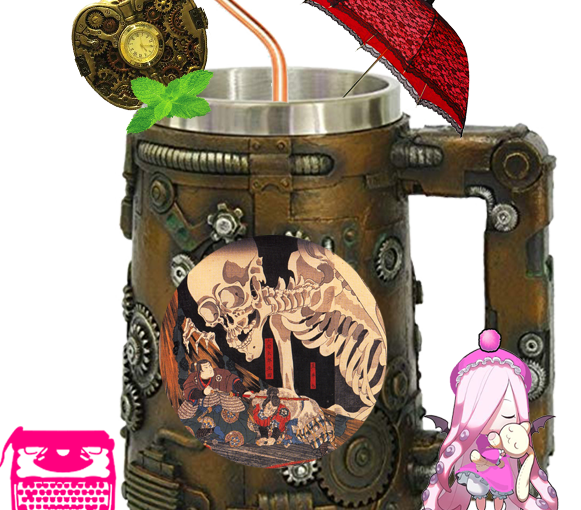 Hello there, its Kuro the Bartender here. I have been working on this fine drink for quite some time and am gonna let you take a nice little sip before I fully finish this concoction. I do hope you enjoy this. This drink will make you feel like a shrine maiden who is stuck in a contract of a yokai.

The sound of sandals echoes through a foggy graveyard. A young woman in a Kuro Muji Tomesoda kimono is walking through the empty graveyard. Her zori slightly sinks into the damp earth. As she slowly moves through the eerily quiet graveyard, a gust of wind makes long dark brown hair flutter. On her left side of her hip is a black katana with a red ito and under that is a matching wakizashi. In her right hand is a large metal spiked club, slumped across her shoulder.

She freezes in her tracks as the earth below starts to tremble. A skeleton arm shoots out from the ground and grabs her right ankle. It yanks her violently down to the moist earth. Her club falls right beside her. Another skeleton arm shoots out from the earth and grabs her left arm. Their grip tightens as she tries to wiggle free. The ground rumbles more as hundreds of skeletons sprout out of the earth. They all straighten up and turn to the woman.

“Foolish Otome, you come here to my resting grounds with the murderous intent to slay me. Such foolishness. You didn’t think I, the Gashadokuro of war, would not feel hostility, your bloodlust, your insidious intentions. Such a foolish Otome. I am made from the bodies of the soldiers and civilians killed by war. Thousands have died, Otome. What is a human Otome even doing in this realm of Yokai?” A loud, deep voice echoes through the graveyard.

“Such a foolish Otome, do you think that you can leave this place? Your foolishness has cost you your life. You shall become my food foolish Otome.” the Gashadokuro bellows.

The young woman grabs the wakizashi from her left side and draws it from the saya. She raises it up and chops down on her left wrist. She yells out in pain as the wakizashi only cuts halfway. Blood gushes from the deep cut from her wrist. The white bone peers through the crimson blood. She lifts up the blade again and quickly chops down, this time cleaving through her wrist. She cries out in pain as blood squirts of her severed wrist. She grits her teeth and rips her right leg from the grip of the skeleton. The skeleton’s bone fingers slice through her leg and blood runs down her leg. She struggles to get up and she sheathes the wakizashi. She bends over and picks up the metal spiked club. She swings aggressively and shatters the skeletons’ arms around her.

“Foolish Otome, you just cut off your own hand and are now bleeding profusely. You are truly a foolish Otome. Do you think that you could leave this place alive? You will most likely bleed out, but I will kill you before you. Tell me your name before I end your foolish life.” Gushadokuro said in a deep voice.

“My name is Chizuru Fukuhara. I will not try to leave nor will you kill me. I am here to kill you, Gashadokuro. You are my third prey.” she says in a calm voice.

Gashadokuro starts laughing, his bellowing voice booms throughout the graveyard. The hundreds of skeletons teeth start chattering as if they were laughing as well. Gashadokuro stops laughing and strikes his huge fist against the ground and quakes the entire graveyard. The skeletons stumble around from the quaking ground. Chizuru keeps her balance and stares up at Gashadokuro. The skeletons around her start falling apart and their bones start flowing towards the Gashadokuro. The bones float up and start combing into a set of Shogun armor.

Chizuru gulps and grips her spiked metal club. Blood continues to leak out of her severed wrist. Her pale face becomes more pale as she is bleeding out. She begins to slowly move forward towards Gashadokuro and takes in a deep breath. The Gashadokuro screams and stabs at Chizuru with it’s long pointy bone fingers. The long fingers rip through her stomach and lifts her up 10 meters and flings her down with tremendous force. Her intestines lay out of her body and blood gushes from the huge wounds in her stomach and back. She has trouble breathing, as blood is filling up her mouth. The Gashadokuro leans over her and stares at the dying maiden whose blood is pooling around her.

“Foolish Otome. You got yourself killed for nothing. You were not able to even hurt me you Foolish Otome. Why did you throw away your life like this? Who sent you to this realm of Yokai to kill me? It does not matter now. You are dying and now will become my food. Such a foolish Otome.”

The Gashadokuro reaches for her body to pick her up. All of the sudden Chizuru grabs the spiked metal club and strikes the Gashadokuro hand within a split second. It’s entire hand and even part of its arm shatters into pieces. Gashadokuro jumps back from shock and stares as Chizuru stands up slowly. Her intestines hanging out of her stomach starts to slide back inside her stomach. The wounds start to heal. Out of her severed wrist, spiders ascend down on a webs and crawl to her severed hand. They lift attach the webs to it and the webs connected to her wrist starts pulling the severed hand back to the wrist. The hand connects back to the wrist. She then takes in a deep breath and vomits out blood.

“How are you doing this Otome? How does a mortal human have the ability to heal like that and how did you have the strength to hurt me like this? What are you Otome!?”

Chizuru smiles and says, “I have killed Jorōgumo and Ōtakemaru. I have obtained the power of spiders and poison from Jorōgumo and the massive strength and weapon of Ōtakemaru. I am also immortal due to a curse from a yokai. She made a deal with me, Kill the thirteen head yokai of this realm and the ruler of Meido to claim back my soul so I can finally die and go with my beloved samurai.”

“How could you have killed Ōtakemaru? He is one of the most feared yokai in this realm. One of the Nihon san dai aku yokai. Who is this yokai that sent you to kill all of us? Answer me Otome.”

“Oh, I am no longer a foolish Otome? I can not tell you the name of the one who sent me but it does not matter anyway. I am going to kill you so you need not to worry about it.”

The Gashadokuro’s chest armor falls apart and turns to dust and repairs his arm and hand. The helmet then turns to dust and forms into a massive bone katana. It grits his teeth and takes a stance pointing the katana to Chizuru.

“You dare talk down to me Otome, such insolence. I can regenerate my body as well with all these skeletons. I will rip you limb from limb and get the name of the yokai that sent you to kill me then I will find a way to kill you.”

“You won’t be able to kill me, many yokai have tried, even I have tried. I am cursed to live forever until I kill everyone I was contracted to.”

“How unfortunate Otome, I will not give you my life so you can fulfill some kind of contract from a yokai. You shall be stopped.”

It raises its massive katana and strikes down at Chizuru with tremendous force and speed. The gust of wind blew her hair back and as it was about to make contact with her body, she quickly knocked back the blade with the club, causing it to severely chip the bone blade. She grimaces as the sheer force of the strike fractures her entire arm in multiple places. Part of her arm bone sticks out of the flesh, causing blood to spurt out of the wound. She quickly drops the club and pushes the bone back into the wound and it starts to heal. The Gashadokuro chuckles as it looks at the chipped blade.

“You may be strong Otome, but your feeble human body can not handle that power. Since you entertained me, I will allow you to leave. You would not be able to defeat me like that Otome. I also have numbers on my side.”

All around them, thousands of skeletons pop out from the ground. Many of them are holding katanas. Chizuru spins around and stares at all of them and gulps. The sea of skeletons all chatter their teeth, filling the entire graveyard with noise. She bends down and slowly picks up the club. She stands up points at the Gashadokuro with the club.

“I will not run away from this fight, I will end your life, the other head yokais lives, and then my own life. I will meet up with my beloved samurai in the afterlife. Nothing will stop me.” she says with a deathly serious tone.

“Such a foolishly brave Otome. KILL HER!”

The sea of skeletons swarm in on her. She takes in a deep breath. She bends her knees and crouches down.

“You are the foolish one Gashadokuro.” she says with a smile as the swarm closes in.

I hope you guys enjoyed the teaser of my upcoming novel (which is still in the research stage). And if you like what you read, you can drop a donation by clicking on the picture below and buying me a coffee.