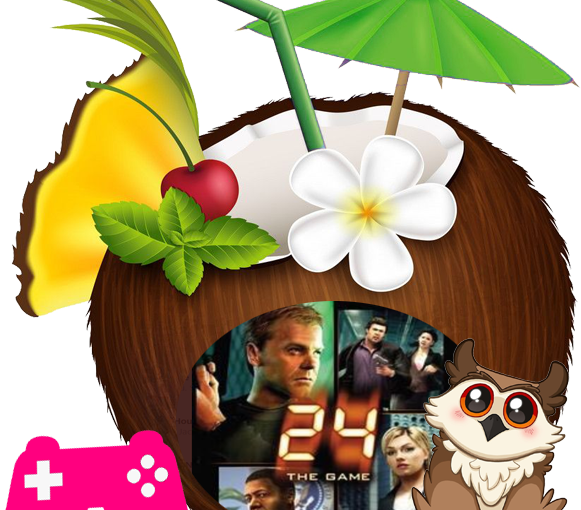 As A Pool Boy, I often have to wade through pool water, when the heating is broken, or late at night to reclaim what Island Guests, have lost! As a Result I am often very cold… Ice Cold! Are You Ice Cold Counter Terrorist Special Agent Jack Bauer? Take The Quiz To Find Out!Chances are you aren’t. I had to find out that I wasn’t special agent Jack Bauer myself the hard way. The hardest way one person can find out. By playing 24: The Game.

Anyone who has ever said that life is short has never played 24: The Game. Based on the hugely successful American television program, 24 the game takes place in between the TV shows third and fourth season. Filling in plot holes, adding additional context and content for hardcore fans. That kind of thing.

For those that have never watched the show – myself included (I was well aware of the show while it was on I just didn’t have a desire to watch Keifer Sutherland bust up terrorist scum back then) the show follows special agent Jack Bauer during his work day which apparently lasts twenty four hours? Because Terrorists never clock out.

Anyways, he shoots people, interrogates and tortures them like some sort of one man Guantanamo Bay. All to save Los Angeles or the Liberty Bell or whatever. You get the idea.

24: The Game picks up between the third and fourth seasons of the show but it really doesn’t matter. It’s not rocket science. It’s pretty easy to figure out what is happening upon starting the game. It’s a third person shooter, with all sorts of puzzles, driving and interrogation mini games. The “fun” police work I guess, considering that all the mini games are much more fun then the actual missions of running around screaming at people to put their hands up and killing them anyways.

24 was Developed by SCE Studio Cambridge – later restructured as Guerilla Cambridge most known for its MediEvil series (and shut down in 2017) during 2005.

It was published by 2k Games for the PlayStation 2 and released February 27th 2006. Essentially the game starts as Jack Bauer and his counter terrorism unit foils a plot to assassinate the Vice President. One thing leads to another and you learn a bit more about the man behind all of these nefarious plans and his connection to Jack Bauer in the past. I won’t really go into it because I’d hate to spoil a fifteen year old video game based on a twenty year old show for you.

And besides. That’s not why you’re here! You’re here for the quiz! The one thing that unites all internet users regardless of race, religion, gender, sexuality or political affiliation. We all want to know more about ourselves and I think that’s admirable. Even cute. Anyways the, “ARE YOU ICE COLD COUNTER TERRORIST SPECIAL AGENT JACK BAUER” quiz will be divided into three parts.

1.) The Basics. This is where a lot of expert quiz makers put basic questions. Yes, that was obnoxious sarcasm.

2.) Physical Fitness. This is the part of the quiz where we’ll gauge if you, the quiz taker, are as physically gifted as Special Agent Jack Bauer.

And finally my favorite section: THE QUOTES. On a scale from one to five we’ll access how much or how little you agree or disagree with a Jack Bauer quote (or a, ‘Bauerism’ as I like to refer to them by)

But before we begin the quiz I do have a new regular section to announce called, “PEE IN THE POOL”. Generally in theory it will consist of me choosing a subject – maybe asking a question about it to vast internet and everyone answering and all of us being amazed and blown away by how similar we really all are especially when sharing a love for something.

Which leads me to my current bone to pick with society as a whole. Twitter specifically. In the week leading up to and during writing this entry I canvassed the harsh terrains of Twitter and Instagram in the search for hardcore 24 fans. Feeling inadequate at fairly explaining the protagonist’s badassery I figured I’d hand the mic over to some true Jack Bauer fans and let them sound off and shut all the haters up for good.

But it never happened. Despite asking nicely, coercion, threats and begging no one would respond to my tweets. Some sympathy likes and retweets here and there but the response was clear. No one gives a shit about Perwinkle The Pool Boy and/or the world has moved on from Jack Bauer.

But I can’t accept that.

It’s much more believable no one answered any of my Tweets because I was coming off like a weird lunatic. Which is true – I was. BUT what I find completely unbelievable is that the country would turn its back on a true American hero so callously. Today – Jack Bauer – tomorrow – George Washington??

The only two people who get any sort of recognition for interacting with my fever pitch tweeting looking for super fans is, Anthony Cox (@AJC2424) and Pinkie herself, who let me know quite proudly that she has over six billion plushed unicorns. So thank you, Anthony and Pinkie.

Every “Yes” answer during the first section will add 5 Points each in your total score.

2.) Do you have a steely cold stare that can hesitate even the most volatile of criminals?

3.) Does your day start with a countdown clock?

4.) Are you a Federal Agent in any capacity?

5.) Has the Canadian actor, Keifer Sutherland ever portrayed you in a television series or movie?

Again, Every “Yes” answer during the first section will add 5 Points each in your total score.

1.) Are you Canada’s sexiest export?

2.) Can you sprint for an unlimited amount of time?

3.) Does your voice sound like old country road gravel in a glass jar of warm whiskey?

5.) Can you carry all of America on your back so it can sleep soundly safe from it’s almost infinite amount of enemies?

On a sliding scale from 1-5 – choose the number based on how much you relate or, “feel” this quote. 5 being the most possible relation – you have possibly said this before or will soon. You feel this quote to the bone.

1.) “I’m federal agent Jack Bauer and this is the longest day of my life.”

2.) “I have killed two people since midnight, I haven’t slept in over 24 hours. So maybe… maybe you should be a little more afraid of me than you are right now.”

4.) “You probably don’t think I could force this towel down your throat, but trust me I can. All the way. Except that I’d hold onto this little bit at the end. When your stomach starts to digest the towel, I pull it out. Taking your stomach lining with it. Most people probably take about a week to die. It’s very painful.”

6.) “I’m done talking with you, you understand me? You’ve read my file. The first thing I’m going to do is take out your right eye, and then I’m gonna move over and take out your left, and then I’m going to cut you. I’m gonna keep cutting you until you give me the information that I need. Do you understand me? So for the last time, where is the nerve gas?”

7.) “Our government has no integrity!”

8.) “By order of the President of The United States, PUT DOWN YOUR WEAPON!”

10.) “By the time I’m finished with you, you’re gonna wish you felt this good again.”

0-25 Jack Bauer Points: You are basically a terrorist. You don’t believe in freedom, America or the long arm of the law. You are a criminal.

25-50 Jack Bauer Points: You are a well adjusted adult. Much more well adjusted then the guy that spent a week writing a blog post about 24

50-99: You are basically a walking Kid Rock song. You drink Liberty from a fountain of kick ass. You sew American flags together to make it heavier in case you need to use them as a weapon. You are Paul Revere on steroids.

100: You are Keifer Sutherland.

AND – before I go: I was going to start to list a bit of ingredients as we go on in honor of the games we’ve covered. This list of ingredients should be able to make you the perfect Periwinkle’s Low Hanging Fruit Punch.

1.) A small chunk of fur from Parka (Cold Winter)

Until next time – thank you to Pinkie and all of the other writers for letting me pollute their space – I’ve read articles by everyone else on the resort staff and they are all very talented writers. I think they just felt bad for me and let me aboard. But I’ll take the sympathy. 😘 – Perwinkle